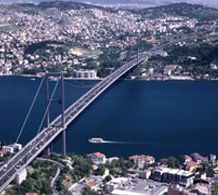 Turkey has such an old history and a rich culture dated from 6.500 B.C,the days of Catalhoyuk,to present modern Repubic of Turkey.

The Ottoman Empire was founded in 1299 and captured during its history such an enormous areas of Africa,Asia and Europe and was governed by sultans with sultanic rules but ends the sovereignty in 1923 on October,29 with a declaration of the Republic of Turkey by the leader of the Turks,ATATURK and his friends after a 4 years war,which we call as a War of Independence between 1919-1923 against an occupant countries in Anatolia.ATATURK was elected as the first president of the new republic and died on November,10th in 1938.From the first days of famous War of Independence till today Turkey has improved itself with a modern reforms and now not only a main bridge between Arabic countries and Europe but also is one of the most important power of the world with the big population of its young generation and with its old history and culture from the days of 6.500 B.C.

Turkey joined to NATO(North Atlantic Treaty Organization) in 1952 and now a days continues the negotiations to be able to be the member of European Comunity.Ankara is the capital of the country and Istanbul is the biggest and one of the most important industrial cities of the country with a population of nearly 15 million.